A benedictine monastery dating back almost 1000 years, a unique mountain which looks almost unreal compared to the surroundings, proudly rising with its jagged rock formations, and a long time kept secret - the Black Madonna miracle statue! This is what we definitely call a must-see place while you are visiting Barcelona.

Montserrat lies about 50 km northwest of the city and it can be reached easily by one hour driving. The scenic route that takes you from Barcelona to Montserrat is along the Llobregat River at the foot of the spectacular mountain of Montserrat. Long before you reach Montserrat, you will see the jagged silhouette of the great mountain and understand how it got its name (“Serrat” means “serrated”). This massive rock fortress rises to over 1200 m high, and is dotted with trails, stairs, caves, chapels and hermitages. You will cross the park to the Sanctuary of 725m above sea level. On a clear day, you can have breathtaking views of the Pyrenees, as well as of the Mediterranean Sea.

Why the Black Virgin is actually black?

A lot of legends and mysteries are related to this Image due to its different color and non-traditional way of representing the Mother of God. Though people say that the black color of her skin is due to candle smoke, when you see her you understand that she is permanently black. If we look back to medieval times we will find that in many Catholic countries we have paintings and statues of the Virgin with dark or black color features. (Poland, France, Italy, Philippines, Portugal, etc.) Whatever was the reason to represent intentionally Mary in black we know that she has a powerful attraction for its visitors and normally she is found and kept on highly energetic places like is considered as well Montserrat.

There is an island called Montserrat in the Caribbean

For the lovers of crystal clear blue water and white sandy beaches there is one more destination you can visit with the same name. If you are wondering why this Caribbean island is named after the mountain and the Monastery of Montserrat, you should look back 500 years ago. In 1493, when Christopher Columbus was sent by the Spanish Kings on his second voyage to America, a hermit from the Monastery of Montserrat went on his ship. His aim was to start spread the worship of the Virgin.

YOU SHOULD NOT MISS

Preserved in the Basilica of Montserrat you must not miss to marvel at the figure of the Black Madonna dated back from the 12th century. It is the biggest attraction and people from all around the World come here to worship the statue of La Moreneta, considered for a miraculous. The statue sits behind a sheet of glass and represents Our Lady in a sitting position. In one hand the Madonna is holding a sphere which symbolises the Universe and allows one to touch her. The child Jesus is on her lap and holds a pod of seeds in his hand.

The Boys Choir of Montserrat (Escolania)

Listening to the Boys Choir at the beginning of the daily mass is one of the most beautiful experiences you can have while visiting Montserrat. They start at 1pm every day at the Basilica but still is good to check Montserrat website if they are not on a trip while you want to come. Founded in 13th century and considered to be the Oldest Boys Choir in Europe make the boys so famous. That's why they are often travelling around the world to participate in concerts.

Once you are in front of the Monastery there are two rack railways connecting Montserrat. If you feel more adventurous you can try one of the funicular trains. The first one is called Funicular de Sant Joan and will take you 500m higher than the level of the Monastery just in a few minutes where you can admire spectacular panoramic views. The second funicular is Santa Cova. It is made to link the sanctuary with the cave where is believed that the statue of the Black Madonna was found in 880AC.

The National Park of Montserrat

Apart from visiting the Black Madonna, many people come here to explore the Natural Park of Montserrat which is a highlight by itself from a geographical standpoint. There are several paths close to the sanctuary which are easy to walk. One of them is The Way of the Cross at the end of which you will admire a splendid view of the rock formations, the Monastery and the land around. In good weather your sight can reach the Pyrenees, to the north, and the Mediterranean sea, to the east. 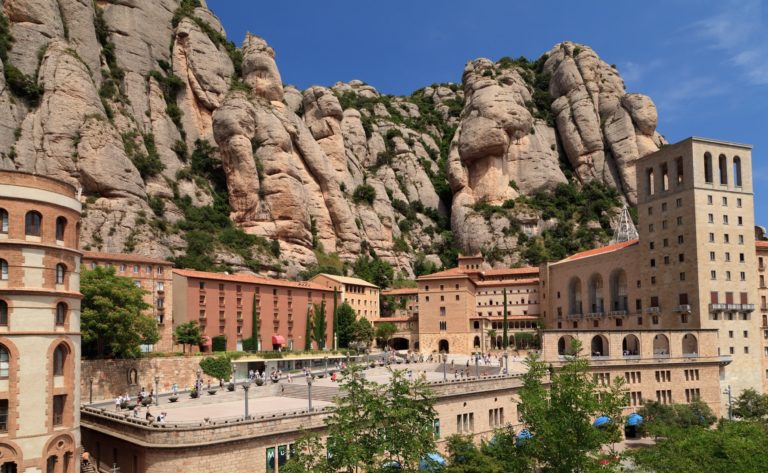 From€ 65
5hsbus tour
A trip to Montserrat – the sacred mountain of Catalonia. This mystical and fairy tale place is full of legends, history and […]
More info

NOTE: These settings will only apply to the browser and device you are currently using.

A cookie is a small file which asks permission to be placed on your computer’s hard drive. Once you agree, the file is added and the cookie helps analyse web traffic or let you know when you visit a particular site. Cookies allow web applications to respond to you as an individual. The web application can tailor its operations to your needs, likes and dislikes by gathering and remembering information about your preferences.
We use traffic log cookies to identify which pages are being used. This helps us analyse data about web page traffic and improve our website in order to tailor it to customer needs. We only use this information for statistical analysis purposes and then the data is removed from the system.
Overall, cookies help us provide you with a better website, by enabling us to monitor which pages you find useful and which you do not. A cookie in no way gives us access to your computer or any information about you, other than the data you choose to share with us.
This website sets functionality cookies. These cookies can also be used to remember changes you have made to text size, fonts and other parts of web pages that you can customise. They may also be used to provide services you have asked for such as watching a video or commenting on a blog. The information these cookies collect may be anonymised and they cannot track your browsing activity on other websites.
You can choose to accept or decline cookies. Most web browsers automatically accept cookies, but you can usually modify your browser setting to decline cookies if you prefer. This may prevent you from taking full advantage of the website.

Links to other websites

Our website may contain links to other websites of interest. However, once you have used these links to leave our site, you should note that we do not have any control over that other website. Therefore, we cannot be responsible for the protection and privacy of any information which you provide whilst visiting such sites and such sites are not governed by this privacy statement. You should exercise caution and look at the privacy statement applicable to the website in question.